Chime is leading digital banks in the US, but can it overtake the old guard?


Digital banks, also known as neobanks or challenger banks, are on the rise. Last October, I looked into the UK market and found the top digital banks had grown new users 209%. The US market for digital banks is significantly smaller than that of the UK, but we’ve started to see the big players from the UK cross the Atlantic to try their hand.

While these apps have been available to download in the US for quite some time, their services have just recently gone live. Monzo launched its beta in the US in June 2019 followed by N26 launching in July. Revolut went live late in March 2020. It will be a long journey but so far Revolut is making the most of it compared to its UK rivals.

Even though the challenger bank scene in the United States isn’t large, it’s been growing steadily for quite some time. By user sessions, April was the market’s first down month since June 2019. 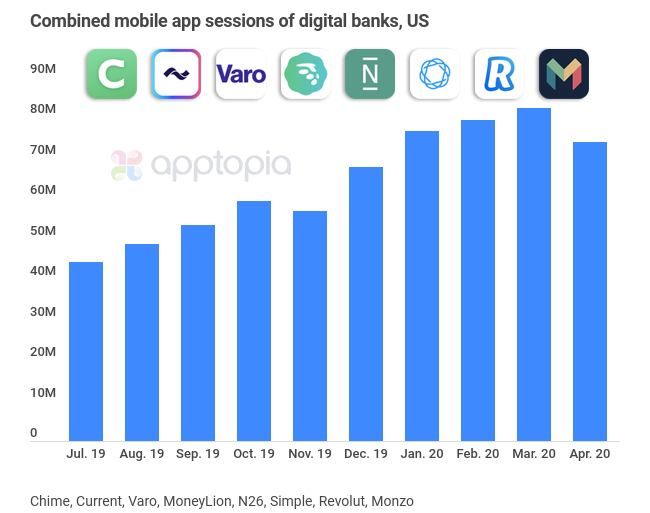 But I’ve buried the lede. Can you write that before you publish? Chime is the 800 pound gorilla in the market with close to 60% of the share as measured by MAUs. It’s also averaging more monthly downloads than Bank of America and Wells Fargo over the past six months. It is however lagging behind Capital One and Chase. 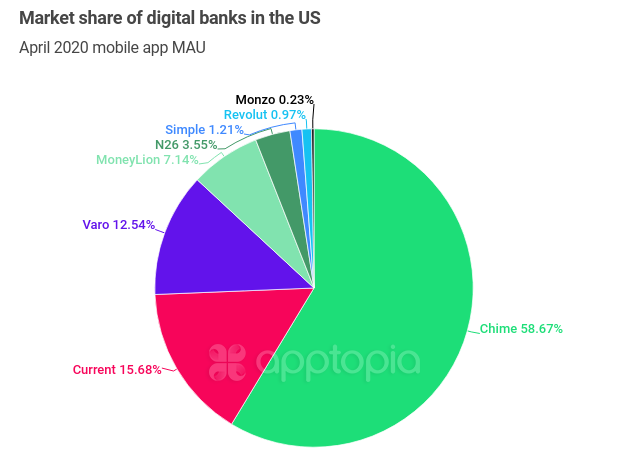 Varo, the third largest player by market share, is set to become the first neobank to receive a US banking charter license. It will enable the Varo to offer a full suite of products such as credit cards, installment loans, home equity lines, CDs and robo-investing.

Simple launched in 2009 but its mobile app did not launch until May 2012. Still, its app is the oldest in the challenger bank space. Even though the app and company had a nice head start, it only holds 1.2% of the mobile app market. It's important to know that Spain's BBVA bank acquired Simple in early 2014. 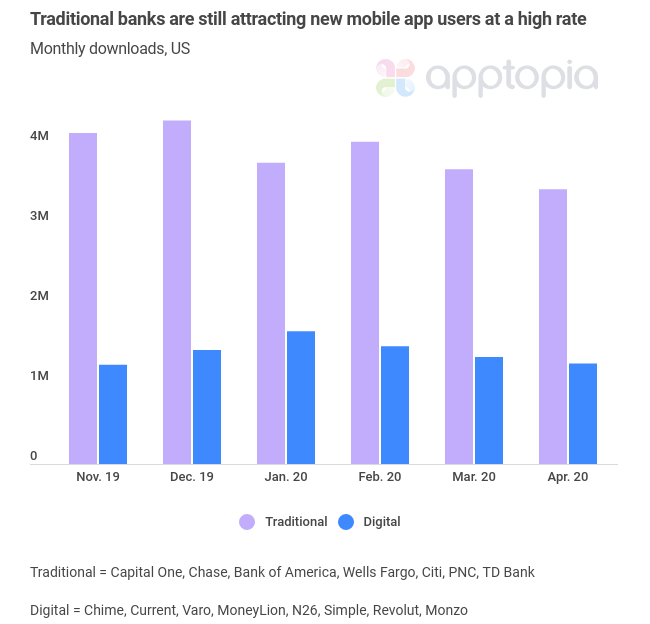 Combining the top eight digital/challenger banks in the US and pitting them against the top seven traditional banks, we see the possibility that you can teach an old dog new tricks. Traditional banks are adding an average of 180% more new mobile app users per month than digital banks are, over the past six months.

There’s more metrics to explore here, especially as rollouts continue in new markets. If you're interested in going deeper to understand things like how customers feel about specific features of these apps, click the big blue button: